How Big Is Your House? Here’s How to Calculate Square Footage

If you own a home, you’re looking to buy one, or you want to have one built, understanding the square footage of your home is vital. While it does require a bit of number crunching, determining the square feet of a house gives you an idea of a home’s size and whether or not it’s the right fit for you and your family. 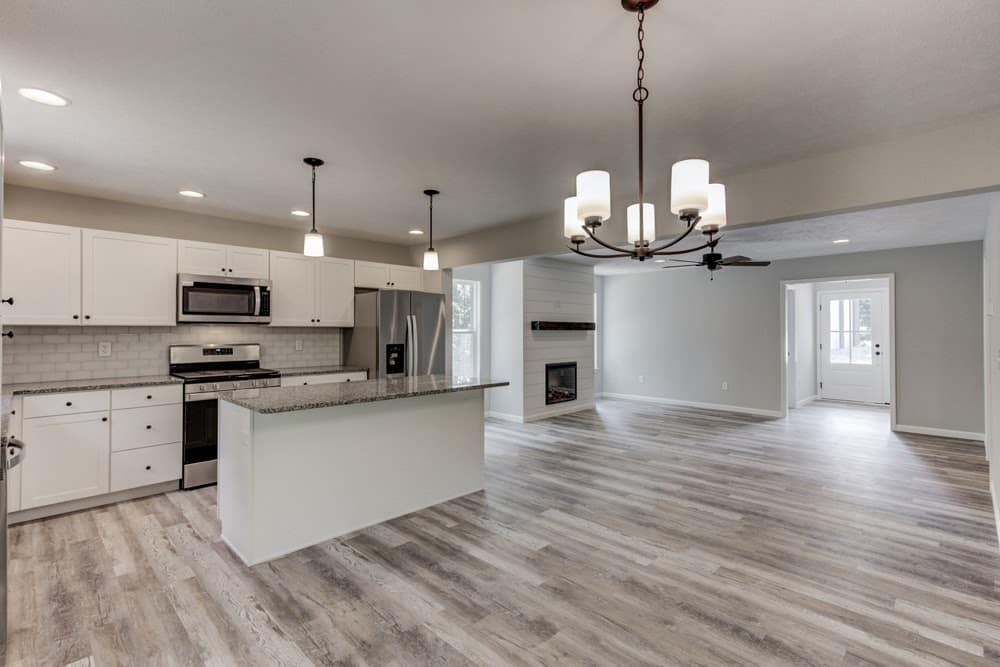 If you own a home, you’re looking to buy one, or you want to have one built, understanding the square footage of your home is vital. While it does require a bit of number crunching, determining the square feet of a house gives you an idea of a home’s size and whether or not it’s the right fit for you and your family.

Why Is Understanding How to Calculate Square Footage Important?

Ensuring a house is big enough for you, your family, and your lifestyle is one of the most critical reasons why understanding how to calculate sq. ft. of a home matters. It’s not the only one, though. Here are a few other reasons why it’s good to know the square footage of a property:

Generally speaking, the livable areas of your home, also known as the gross living area (GLA), are what you would include in your square footage calculation. When you’re looking at how to calculate square feet of a house, the area generally needs to have the following attributes to count as “livable space”:

‌For the most part, you would include rooms such as:

‌A finished basement may also count toward the total square footage of a house. It depends on a few factors, though:

What Gets Left Out?

When you’re looking to calculate the square feet of a house, you should also take note of what you shouldn’t include in your measurement. Areas to exclude generally include:

There are a few exceptions here. For instance, you typically wouldn’t include a porch in your square footage calculation. However, if it’s a “four-season” porch, you will. These porches have several windows that show a clear view of the outside world, as well as a permanent heat source.

Finished vs. Unfinished Areas of Your Home

In some cases, you might see square footage in two categories — finished and unfinished. The finished square footage of a house includes any area of the structure that has a covered ceiling, floor, and walls. That means you can’t see the skeletal structure of the walls or ceiling, nor can you see the electrical wiring and pipes running through the home.

‌When it comes to the floors of finished areas, the space has to have a covered subfloor. On the main level of a house, that base layer is typically a material known as oriented strand board, a material that looks similar to plywood. In basements, the base floor is generally concrete. Regardless of the base material, it needs to have flooring material like hardwood, tile, or carpet over it to count as finished space.

‌Unfinished space, on the other hand, is as the name implies. It’s a space within the home that’s not finished. The walls don’t have drywall or plaster covering the beams, which also exposes the wiring or pipes. Or, you may have an exposed subfloor or ceiling in the space. Unfinished spaces likely don’t have heating and cooling blown into them either. In other words, it’s not “livable.”

‌One thing you can do is measure the square footage of both finished and unfinished areas of a home and divide them into their respective categories. That can give you a better idea of what livable space you have versus what usable (but unlivable) space you have.

Above vs. Below Ground (Gradient) Square Footage

How to Calculate Square Footage

Now let’s take a look at how to calculate the square footage of a home. The process is pretty straightforward. Before you begin, you should have a measuring tape or a laser measure, a calculator, a pen or pencil, and a piece of paper or notebook.

‌Once you have your supplies, you’re ready to begin. Go room by room, measuring the length and width. Then, multiply those figures by one another to get the square footage of that space. For example, if you have a room that’s 12-feet by 10-feet, you would multiply 12 by 10 to get 120 square feet.

‌Once you’ve completed all of the finished areas of your home, you add them together to get the total finished square footage. You can also do the calculation for unfinished spaces or your basement and keep that as its own category.

How to Calculate the Square Footage of Rooms with Uneven Measurements

What if you have rooms with uneven measurements? You will have to take a couple of extra steps, but it doesn’t add much more work to what you’re already doing.

‌In this example, the square footage of the room would be 182.25 square feet. 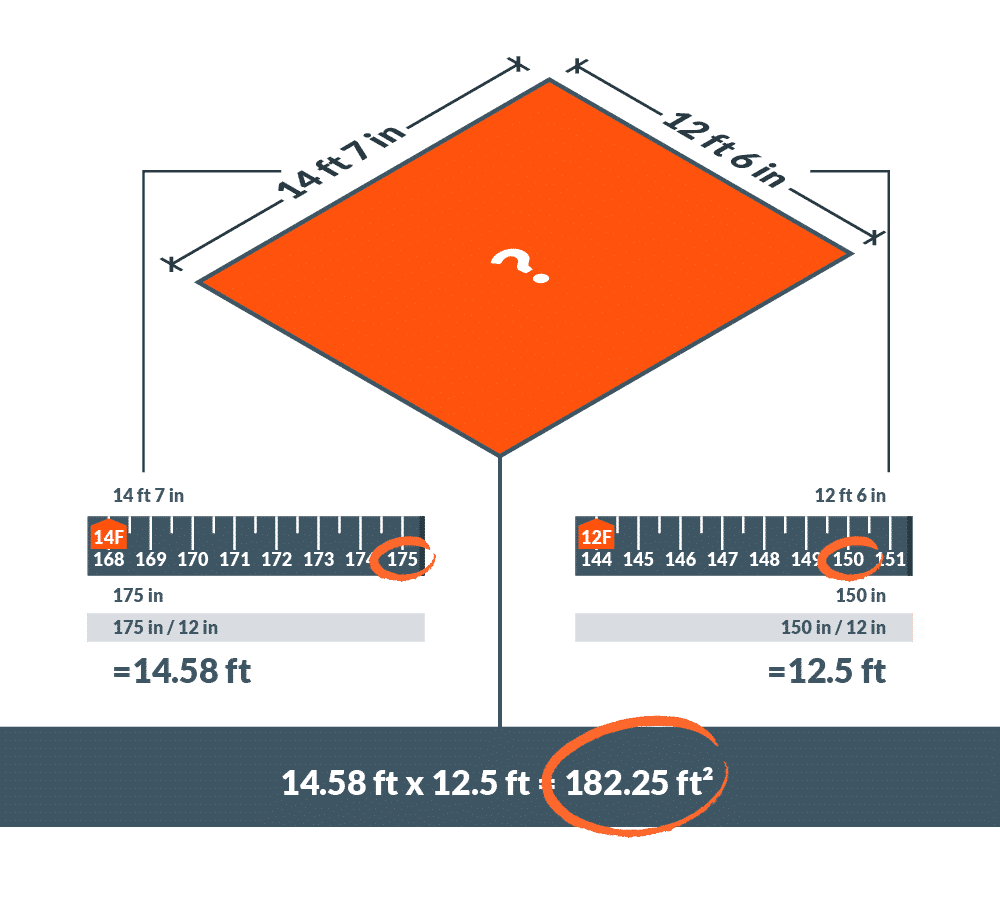 While uncommon, some homes have circular rooms. Here, you have to do things a bit differently. First, you need to determine the radius of the room. That’s the distance from the wall to the center of the room. Alternatively, you can measure the diameter of the room from one wall straight across to the other side and divide that number in half.

‌Once you have the radius, multiply the figure by itself. For example, if the radius of your room is 10 feet, you would multiply 10 by 10 to get 100. Next, multiply that number by pi (3.14). The square footage of your circular room is 314 square feet. 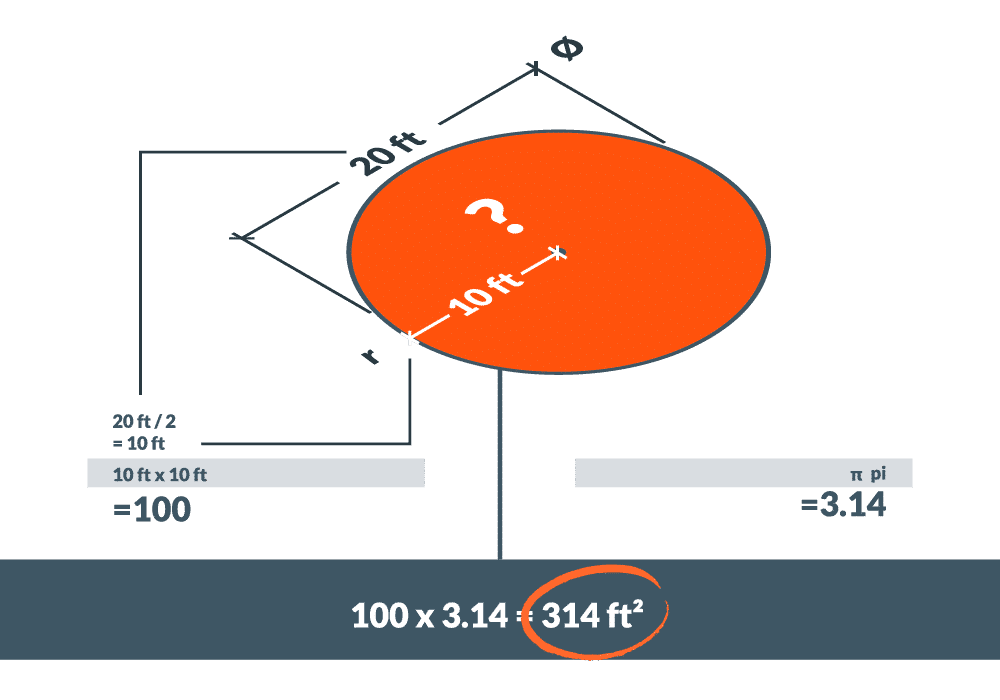 Tips for Determining the Square Feet of a Home

Here are a few additional tips to keep in mind that can help make calculating the square footage of a home easier:

Draw Out a Floor Plan

For some people, having a visual can be beneficial. You don’t have to get fancy with it, but a rough drawing of the home can help make it easier to add the rooms together. It can also help to ensure that you don’t forget any of the rooms, either.

Determine Which Rooms to Measure

Once you have your floor plan, decide which rooms you want to measure. In most cases, that’ll be the finished areas within the home. You can measure the unfinished spaces, too, if you want that information.

‌If you do decide to measure the unfinished areas of the home, such as the basement, garage, patio, or detached structures, make sure to place those measurements in a separate category.

Remember to Measure Your Stairs

One often overlooked calculation in square footage is the stairs. If your home has (or will have) a staircase, measure the depth and width of one step and multiply that number by the number of total steps. Add that figure to the total square footage (finished) of the house.

Calculating the square footage is a straightforward process that lets you know just how much livable space a home has. That figure plays a role in determining the value of a property and how much you pay in property taxes.

‌While the average square footage of a house does determine some things, you shouldn’t get too caught up in it, especially if you’re looking to have a builder build a new home. The cost per square foot can vary greatly from one builder to the next.

‌The reason for this is because there isn’t an official standard for what’s considered a “square foot.” Check out our blog post regarding the cost per square footage to build a home for more information.

‌If you’re looking to build a custom or semi-custom home, Reinbrecht Homes is here to help. Check out our gallery of completed houses, browse our floor plans, and download our free standards guide today.

6 Things To Do Before Building Your First Home

How Much Does It Cost to Build a House?

Home Maintenance Items Everyone Should Perform

What Are Service Costs and Hidden Costs in Homebuilding?

Why Flexibility is Important in Every Aspect of Home Building