Home Insurance Tips, From a Homebuilder

Homeowners & future homebuyers should understand the importance of properly insuring a home, so we’re going to offer up some industry tips to help avoid underinsurance.

There’s a certain degree of mental constipation that accompanies any insurance discussion. Even though insurance is something we all need and are even required to have at times, few of us understand how it works or what extent we’re protected from life’s uncertainties. Finances are difficult. Home insurance is no different.

As a homebuilder, we’ve been uniquely positioned over the last twenty-odd years to bear witness to the best and worst examples of how homeowners’ insurance can make a family whole after a tragedy or leave them worse off than before.

Thankfully, you do not have to be a tax expert to keep yourself — and your home — safe. You just need to follow a couple of rules when selecting a policy.

Our goal with this post is to alert homeowners and future home buyers (like you) to the importance of properly insuring your home and hopefully help our readers avoid the pitfalls of underinsurance. Instead of spouting off a long list of best practices for choosing a policy, we’re going to focus on a couple of key home insurance tips that are specific to repairing and rebuilding your home following a claim.

Why Home Insurance Is So Important

Before we dive in, you need to understand why proper home insurance is more important than ever. It’s always been a good idea to protect your house with insurance, but changing world conditions have made it essential.

The country has seen an unprecedented number of truly horrible natural disasters in recent years. The Midwest has suffered multiple unusual weather events that rendered thousands homeless in the past decade.

In December 2021, a night of devastating tornadoes killed more than a hundred people in Kentucky and nine other states. It was the single deadliest tornado event in U.S. history, and it was followed by another rash of tornadoes just days later. These storms were entirely out of season and destroyed more than a thousand homes.

Tornadoes aren’t the only weather event becoming more common in the Midwest. Between the Great Lakes, the Mississippi River, and the Tennessee River, floods are a critical issue for residents.

For example, the Tennessee River flooded in 2010 after record-shattering rainfalls. The flood destroyed or damaged as many as 11,000 properties along the river banks. Furthermore, 10,000 lost their homes, and there was more than $2 billion in private property damage overall.

Floods and storms of these magnitudes are becoming more common as the climate becomes less stable. This doesn’t even touch on home-destroying issues like wildfires or earthquakes in other parts of the country. You’re more likely to lose your home to an unpreventable natural disaster than ever before.

Storms and climate-related disasters aren’t the only things to worry about. The housing market is taking off. Over the last year, the value of a single-family home in the U.S. has increased by an average of 12.4%. While this is excellent if you want to sell your home, it’s not ideal if you need to buy a new one because you’ve lost your house to a disaster.

Furthermore, the cost of renovation materials has also increased in recent months. If a tornado or flood hits your home, it will cost more to repair than it may have in the past.

In combination, these factors mean that you’re more likely to lose your home, and it will cost more to repair. As a result, it’s more important than ever to make sure your home is fully insured against all disasters.

“There’s a fine line when it comes to homeowners insurance. Nobody wants to pay too much for coverage, until they absolutely need it.“

We most often see two types of home coverage in this industry: Actual Cash Value (ACV) and Replacement Cost Value (RCV). If you’re unfamiliar with either, here’s a quick explanation: 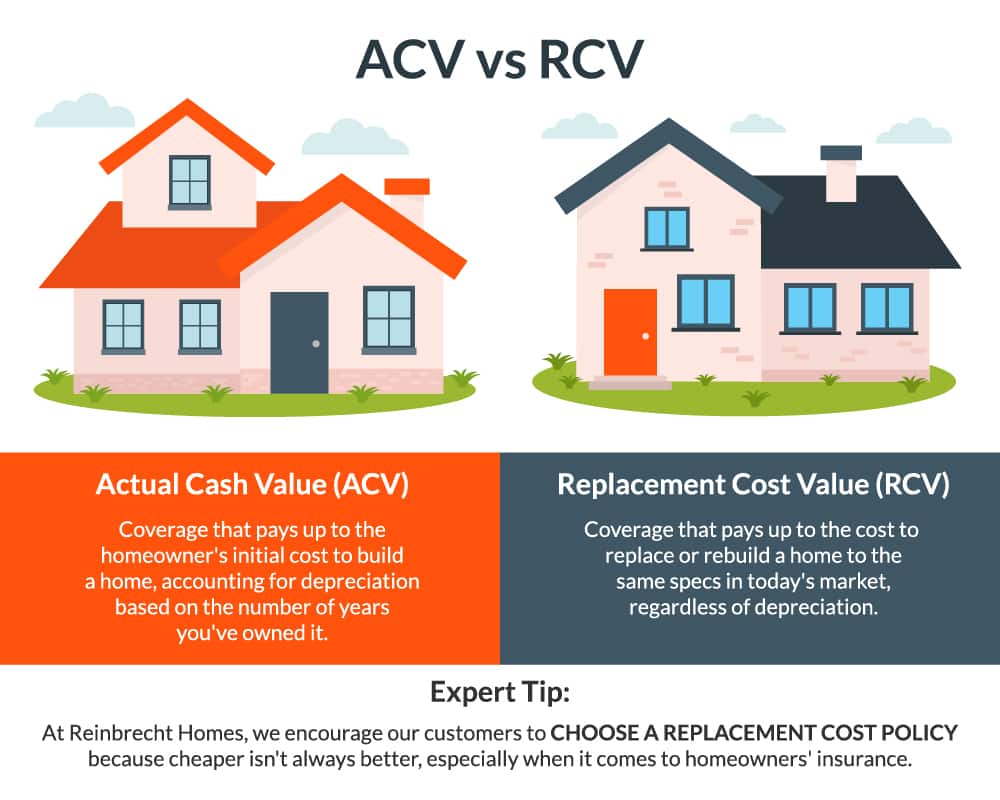 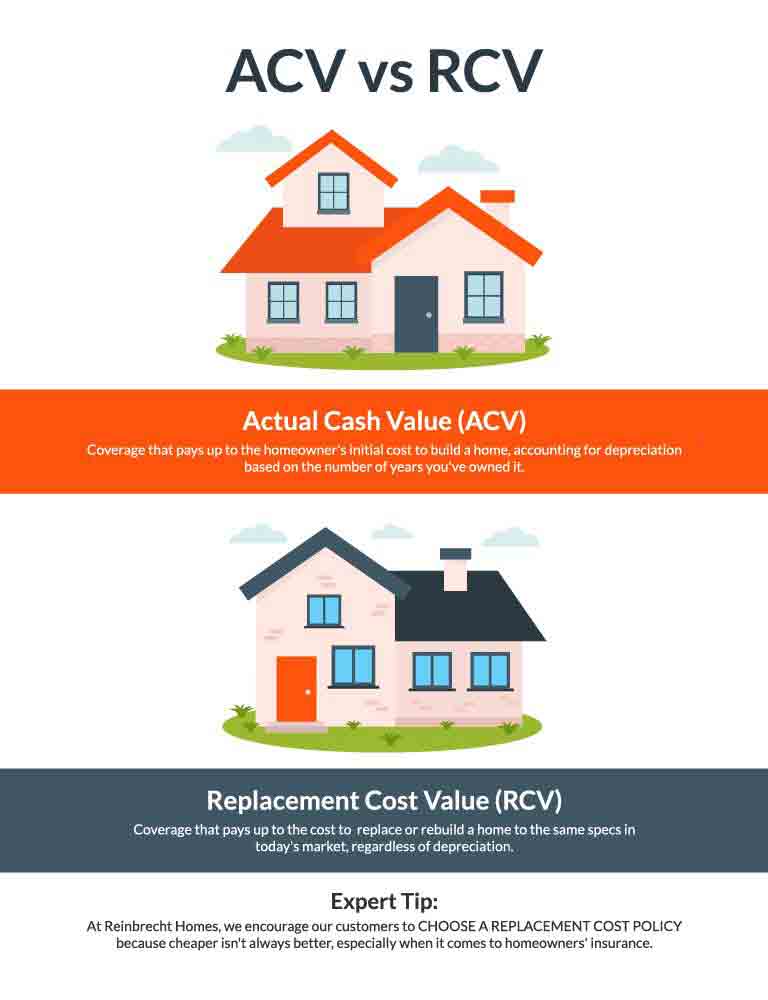 There are also “extended/guaranteed replacement cost value” policies, though these aren’t as common. These policies include extra buffers that will cover the cost of repairing your home even if it exceeds your standard policy’s limit. They can give you wiggle room to make improvements to your home after a disaster, but they have a price tag to match.

We encourage you to CHOOSE A REPLACEMENT COST POLICY because cheaper isn’t always better, especially when it comes to homeowners’ insurance.

ACV insurance policies are cheaper for obvious reasons, but you’ll never receive the total amount you need to rebuild your home completely.

For example, if you’re “properly insured” with an ACV policy for $200k, but your home is 50 years old, your adjustor might determine you’re only eligible to receive $150k following a claim.

RCV policies, on the other hand, are designed to get homeowners back into new homes that are as nice as the ones they had before whatever disaster or “act of God” destroyed the original. And with the addition of policy endorsements, homeowners can rebuild their homes to current codes.

Good insurance isn’t always cheap. Still, properly insuring your home is a vital part of responsible homeownership. The cost is worthwhile if you suffer a fire or natural disaster that forces you to make major repairs or rebuild entirely.

One of the most important (and consistently overlooked) home insurance tips is to make sure you have a “Code Rider.” This is a provision obligating your insurer to cover the cost to bring your home back up to code during a rebuild.

Easily overlooked things like plumbing, electrical work, and even windows are subject to different best practices as time goes on. A code rider covers the extra cost to rebuild your home to present-day industry standards.

A house insured for $100k that costs $200k to build can’t be rebuilt without extra funds. Your insurance company is only required to pay you $100k, and you’re responsible for the remaining amount.

Simply put, if your home is underinsured, your insurance company is not obligated to pay for you to rebuild it fully.

Your home is your biggest investment. Try not to put yourself in a position to lose it.

Be Aware of State-Specific Insurance Laws

For our regional readers, one insurance quirk to be aware of pertains to roof and siding damage. While it varies from state to state, insurance providers in Indiana are only required to replace the side of a damaged roof or home. This can leave you, the homeowner, footing the bill if you’d prefer a complete replacement — the only loophole being situations where your original roofing or siding is no longer available.

Location-specific laws like this highlight the necessity for homeowners to understand their insurance policies.

Talk to a Homebuilder or Contractor Before Settling With Your Insurer

People settle all the time for insurance claim payouts that look sufficient on paper but won’t begin to touch what it actually costs to repair or build a new home.

One of the best ways to ensure your insurance adjustor has properly valued your claim is to talk to your homebuilder, contractor, or another qualified home professional and get them involved.

Insurance underwriters do this because they think it’s too risky to insure a home for these specific events. However, flood insurance in a flood plain or tornado coverage in Tornado Alley are the most important coverage because those are the disasters you’re most likely to face.

The solution is to get disaster-specific insurance. Your insurance company probably offers additional policies dedicated explicitly to the more common disasters in your area. California residents can get wildfire insurance, people near the Mississippi can get flood insurance, and Oklahoma and Kentucky residents can get tornado policies.

These policies are available as both ACV and RCV compensation. Like your standard policy, we recommend getting replacement cost policies for specific disaster coverage. If you lose your home to fire, flood, or storms, the extra cost will be well worth having your home replaced exactly as it was.

At the End of the Day, Who's Responsible When Things Go Wrong?

A good insurance agent should immediately spot the holes in your coverage, but if you don’t listen to their advice, the responsibility is shared.

Do your research, learn what type of coverage you need, and be sure to understand the nuances of your particular policy. Follow these home insurance tips, and you’ll sleep a lot better at night knowing that when disaster comes knocking, you’ll be able to rebuild without taking a huge step backward. Ready to learn more about your home build? Download our free Home Purchasing Guide for more insights from a home builder.

Insurance During Homebuilding: What You Need to Know

What Goes Into The Price of a Semi-Custom Home?

Get Free Financing Or 10% Off Upgrades! Get Details

Get Free Financing Or 10% Off Upgrades This Month Only! Get Details